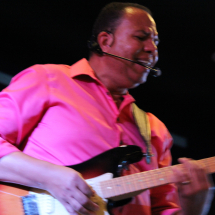 Michael Johnson, originally from Torrington, Connecticut, started his musical journey at the age of 10. Inspired by his uncle who played saxophone with the legendary soul artist James Brown and his grandfather, he began playing the saxophone. Along with the saxophone, he also studied drums as a child, and later picked up the guitar as a teenager. Later on in college, it was then that the music bug really got to him and he quit engineering school to pursue music as his future career. He enrolled at the North Texas State School of Music as a jazz education and performance major. Later, he became interested in arranging and orchestration and attended the New York School of Orchestration. At this time he began to study voice with the pop music icon Michael Bolton. An avid music lover of all genres, he has played many styles of music in his life and has played with many orchestras, jazz bands, including rock, pop, and soul bands. He currently has a CD on iTunes called "Michael K -Moment In Time" and continues to write and record music.