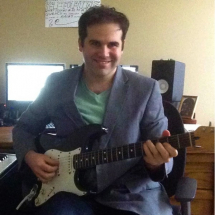 Michael Hazani first picked up the guitar at the age of 13, and hasn't put it down since. An experienced tutor with over a decade's worth of students, Michael is a graduate Summa-cum-Laude of Berklee College of Music where he studied songwriting and production in addition to guitar performance. Having graduated in 2010, Michael has spent most of the last decade in the NYC music industry - writing, performing and producing music for local and international artists as well as having his original music placed in TV shows, films and commercials.

In 2014 Hazani formed and toured with the Electro-rock project Qualia which won the John Lennon Songwriting Contest / A3E "Innovators in Music" Award and has garnered critical acclaim and for its innovative Virtual Reality Songscapes. Currently based in Seattle, WA, Michael continues to perform, teach and live musically, while also nurturing his passion for interactive art, programming and the exciting intersections where music and technology collide.

A songwriter at heart, Michael specializes in working with students of all ages who - in addition to learning how to play the guitar and develop a musical skill-set - are also interested in writing, producing and performing their own music.