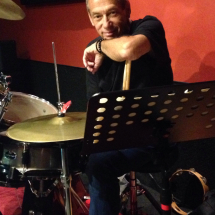 Michael Dorfman obtained his Bachelors Degree in Music Education from City College of New York. After completing his education, he took off to see the world! Over the span of 10 years, he performed in many cities throughout the country including internationally; from Montreal to Miami, New York and Atlantic City to Las Vegas, and almost everywhere in between!

Upon moving to Ft. Lauderdale, Michael has performed at almost every major Hotel, Resort, Country Club, Showroom and Theatre from Orlando to Key West with bands, acts and shows. He has also played on many cruise ships, and in South America and Europe.

Michael has been a Broward County School Band Director and Music Educator for over 14 years. He has worked with Elementary, Middle, and High school bands, Concert bands, Jazz bands and Drum lines. Also, he has played with the Broward Symphonic Band for 14 years playing both trumpet and drum set.

Michael is very pleased to be working with the band's Board of Directors as Vice President and enjoys teaching lessons with Lessons in Your Home.