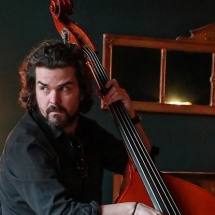 Education: Masters in Composition at SMU Bachelors of Music in Film Scoring at Berklee

After graduating from Berklee College of Music in 2008, Michael moved from Boston to New York City and 5 years of performing and touring based out of Brooklyn. Michael toured with various acts performing at festivals and venues such as SXSW, CMJ, the Blue Note, and the Troubadour in Los Angeles.

Moving back home to Texas in 2012 working as a film and commercial music composer, Michael decided to pursue a master’s degree in composition. After being accepted to SMU in 2018, Michael flourished at the Meadows School of the Arts at SMU and is expected to complete is degree this December. Additionally, in May of 2020 Michael was awarded SMU’s residency composer position at the Irving Symphony Orchestra.