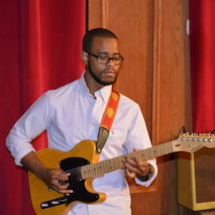 Matthew Walker was born into a family of four: his mother, Donna, his father, Jonathan, and his older brother, David. At the tender age of four Matthew picked up his first instrument, the drums. His mother sang in a band, Burning Bush. It was this band’s drummer that gave Matthew the inspiration for music. Years later, Matthew would follow in his mother’s footstep and pick up the clarinet. For 13 years Matthew would pursue a professional career as a clarinetist placing 5th overall in the All-State Band and received acceptance into the Boston Conservatory, Georgia State University, and Columbus State University. Upon attending Columbus State University as a clarinet performance major, Matthew picked up playing piano and the guitar.

Along with his classical training in Music Theory, Matthew also furthered his Music Theory knowledge with contemporary and jazz theory at the Atlanta Institute of Music; all of which he continues to perfect daily. Matthew has six years of teaching experience which include: piano, clarinet, guitar, and Music Theory. He is also the lead guitarist for Resurrection House for All Nations where he has been doing ministry for two years.