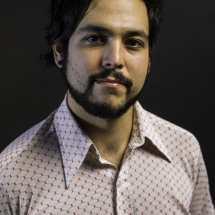 Creativity in music comes from a place of comfort with the desired skills we develop but passion for music is equally as driving during the process of finding our own voice.

Matthew Garcia known by his stage name of "Tito" has found a life of passion for music through drums. He currently co hosts an open mic in Dallas every Tuesday night, plays guitar, writes songs for his own band, and spends his time as freelance journalist in the local music scene. With experience in over 30 different projects, 15 years of performing live music, and over 19 years of drumming, Matthew has generated a fulfilling career of playing drums.

In his earlier days as a young drummer he found himself gracing stages like the Palladium Ballroom and Gilley's in the DFW area. His journey since then has focused on working with premier acts throughout the metroplex such as Crimson Kid, Chilldren of Indigo, Tin Man Travis, Rei Altru, and Wolves Reign. Matthew has since been changing in stylistic approaches over his career from heavy progressive rock, to funk, to soul, and even hip hop. In 2016, Matthew joined the dance and percussion based eco-conscious performing troupe Vocal Trash where he displays his drumming skills every year at the Texas State Fair. In 2018, local blog "The Ghost of Blind Lemmon" named him best drummer in DFW. To this day some of his fondest memories come from playing sold out concerts at The Granada Theater and Trees- two venues he once desired to play as a child.

His career as a musician off the stage began as a receptionist for The School of Rock in Dallas at the age of 19. Since then, Matthew has worked as the music director and teacher of Alchemy music academy in Richardson.

Matthew has a built in passion for music and drums that are bound to be infectious for any student!