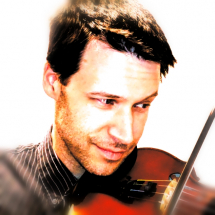 Education: After graduating high school I went to community college for a year then ending up going to Heald Business College where I graduated with an AS in Accounting. I’ve taken a couple of classes at BCC but no other real education to speak of.

Matt’s journey as a musician began in 6th grade when he enthusiastically joined the school band. Matt was presented with a curious, giant brass instrument his teacher referred to as a “baritone”. When he was asked to blow into it and see if he could make a noise, a big noise he made and a life long passion for music was born. After 5 years of symphonic and marching bands his musical tastes began to change and the baritone was left behind. Since then he has played a number of other instruments including trumpet, piano and several years of guitar. However, once he got his hands on a violin everything else was off the table and he has been a passionate string player ever since.

After nearly two decades in the tech industry, Matt gave up the corporate life in order to pursue music, enrich his life, and follow his passion. Because of Matt’s love of classical and fiddle music he picked up the violin almost 5 yrs ago. He threw himself into his practice with fervor and excelled so quickly that he was able to begin passing on his love of the instrument to students after playing for only a year in to his violin career. This has enabled him to keep fresh in his mind what it’s like to be a student and the challenges that it presents every step of the way. Currently, some of Matt’s students have gone on to be concert masters of their local school orchestras as well as members of the Seattle Youth Symphony Orchestra.

Matt as a teacher invests personally in each student and their goals as a musician, expertly mixing the traditional Suzuki method with students individual interests whether that be classical, bluegrass or Irish fiddle, pop, rock, etc. Matt’s goal is to inspire a generation of music enthusiasts and he knows that honing in on individual interests really sparks students’ creativity and love of the craft.

Matt is currently playing with the Eastside Symphony.

After graduating high school I went to community college for a year then ending up going to Heald Business College where I graduated with an AS in Accounting. I’ve taken a couple of classes at BCC but no other real education to speak of.