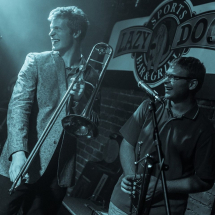 Mark Wilkolak began playing trombone when he was 10 years old and instantly fell in love with the instrument. He began studying privately with such teachers as Dan Lahman, Scott Crump (lead trombonist for the Falconaires) and Jeremy Van Hoy (bass trombonist for the Colorado Springs Philharmonic).

Mark Wilkolak is currently a member of several local projects such as Emma Mayes and the Hip, Kessel Run, Groovealicious, Mercenary Horns, and has been a past member of such bands as The Pamlico Sound, Brothers of Brass, Guerilla Fanfare, Lady and the Gentlemen, and Moontang. Mark has also sat in with truly fantastic groups such as TAUK, Fruition, and The Magic Beans, and has played with members of the Runnikine, Dopapod, and Galactic.

Mark Wilkolak currently attends the University of Colorado at Boulder where he is pursuing his Bachelor’s Degree in Music.