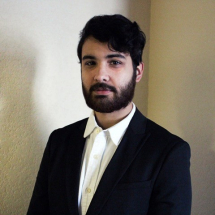 Marcos Benitez is guitarist, songwriter, and music teacher from South Florida. Growing up in the multi cultural city of Miami, Marcos was exposed to latin and jazz music at an early age and by the time he was 12 he had discovered guitar as his passion. Marcos played with several different bands in high school, each with their own unique style which further diversified his influences.

During his college days at Miami Dade College he focused more on modern styles of jazz under the guidance of Tom Lippincott who gained much fame playing with Randy Brecker and Jon Stowell as well as having many well documented guitar clinics across the country. After graduating, Marcos discovered the joy of teaching and has since then been guiding students of all ages down the path that he began at an early age.

As an enthusiastic, patient, and bilingual music teacher that strives to bring out the best in each one of his students, it is Marcos' hope that students will find him easy to relate to and inspiring. His friendly, open minded personality as well as his malleable teaching methods create this atmosphere in each guitar lesson.