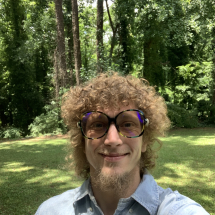 Majid is a multi-instrumentalist, composer, curator, and fixture of the Atlanta improvisation and new music communities. He holds a Bachelors of Music from Georgia Southern University where he studied Composition and Jazz Studies. Majid’s prolific work as a composer focuses on resonance, dynamics, and experimental approaches and has been featured by Magic Lantern label, among others.

Majid has experience performing across the United States and Europe as a soloist and in the duo Whispers of Night, as well as experimental music groups such as the Convergence, Chamber Cartel, Bent Frequency, Small Peoples Music Ensemble, and Atlanta Improvisor’s Orchestra, which in 2018 composed the music for a popular TV network here in Atlanta. He is also a founding member of BASrelief whose debut album earned a spot on Atlanta’s Creative Loafing’s “Best of 2019” list as well as being cited in an article on jazz and improvised music in Atlanta by Bandcamp daily.

In addition to his work as a musician and music teacher, Majid is a dedicated father, gardener, animal lover, and painter. He sees each lesson as an opportunity to foster an appreciation for music and a spirit of creativity within his students that will serve them for years to come.