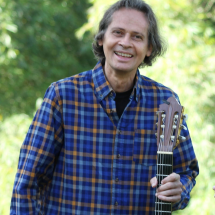 Education: Please visit my website to find this information: www.zeaguitar.com

With over forty years of professional experience, the Venezuelan guitarist Luis Zea is admired by critics, audiences and colleagues for his versatile talent as a performing and recording artist, teacher, arranger, composer, and author. He is the outstanding disciple of two Venezuelan guitar legends: Antonio Lauro and Alirio Díaz. In England he earned degrees from the University of London (King’s College) and University of Reading, and also studied privately with renowned British pedagogue John Duarte.

Zea has toured and given masterclasses worldwide, including venues such as the Wigmore Hall (London) and Alice Tully Hall (New York). Zea was a Visiting Professor at the Indiana University School of Music (Bloomington, USA) and the State University of New York (Fredonia), and has been involved in numerous recording projects. His many articles have been published in Venezuela, England, Italy, Germany, Canada, USA and appeared in journals such as Guitar International, Guitar Player, Gitarre und Laute, Classical Guitar, Guitar Forum. and Venezuela Sinfónica. have made a significant contribution to guitar pedagogy.

Additionally, Zea is co-author (with John Duarte) of the influential book The Guitarist’s Hands (Universal Edition, 1978), and a monograph entitled On Teaching the Unteachable. commissioned by the European Guitar Teachers Association (EGTA) and published in its journal Guitar Forum (2003). The Canadian publishing house Dobberman Yppan launched a series of editions featuring some of his compositions and arrangements prefaced by Leo Brouwer, who likens Zea’s level of artistry to that of Manuel de Falla and Miguel Llobet. The D’Addario Co. –one of the world’s leading manufacturers of strings for musical instruments– has used Zea’s artistic image to promote its products. Guitarists from several continents have traveled to Venezuela to study with him under the sponsorship of the international education programs of their countries. Zea now resides in the South Florida area.

Please visit my website to find this information: www.zeaguitar.com