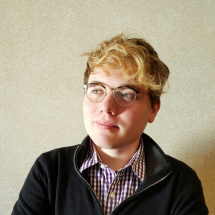 Leo Ciarlone is a piano and low brass instructor who works with students throughout the D.C. metro area. He began his musical studies at age seven with the piano, and he started his brass study in high school. He studied piano under Ralph Zitterbart and played trombone in multiple youth orchestras before attending college. He went on to study trombone performance, piano, and music theory at the Boyer College of Music and Dance at Temple University. He received further training in music at the College of William and Mary.

At the College of William and Mary, Leo was awarded scholarships for private lessons with his teachers Anna Kijanowska and Christine Niehaus. He specializes primarily in 19th century music and has been praised for his interpretation of composers such as Schumann and Chopin. Additionally, he is attracted to the works of many 20th century composers such as Ravel, Schoenberg, and Prokofiev.

Leo's collegiate instructors included members of the Pittsburgh Symphony Orchestra and Philadelphia Orchestra, including James Nova, Matt Vaughn, and Blair Bollinger. While in Philadelphia, he performed with brass ensembles comprised of faculty and musicians from Temple University and The Curtis Institute of Music. Additionally, he has performed professionally as the principal trombone in symphony orchestras, wind ensembles, jazz bands, musicals, and different chamber groups. Leo has been praised for his tone and his adaptability and understanding of different musical styles.

Leo is currently an active music instructor and has worked with a wide range of piano students as his primary instructional focus. In the realm of piano instruction, his students develop an extensive repertoire that ranges from easy beginner pieces through pop and classical music. In many ways, this echoes his own training and areas of concentrated study throughout his youth and collegiate experience. He is also designated as one of LIYH's young beginner specialists, and he works with very young students through advanced and adult students on the instrument. Piano has been a consistent, expressive outlet for Leo, and one that he finds is an excellent foundational instrument for life-long music appreciation and functionality. His students perform regularly, and he is a member of MTNA, which provides extra festival opportunities each year.

Leo's brass instruction coincides with school programs, ensembles, and youth orchestras to take a student's playing to the next level with whatever setting in which their primary study takes place. Helping students move to the top of their ensemble and fill in technique development concepts is an important point of focus in working with his students. He also fully encourages branching into solo rep for students performing in an ensemble as an added outlet for their creativity and study.

Something Leo finds particularly inspiring about music is the sheer multitude of emotions that can exist within a single work, or even a single musical idea. As a teacher, he hopes to communicate the importance of these moods and how they are translated in performance and technique.