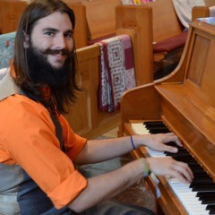 While at the University of Illinois, Kyle was the President of two registered student organizations, the “Audio Engineering Society” and “Illini Film and Video,” and worked part-time as a videographer for McKinley Health Center. Throughout his studies, he has specialized in music for film and video games, as well as electro acoustic music composition.

Kyle’s teaching career began in high school, where he taught independent piano and saxophone lessons. He draws his teaching style from his own professors. He says “I have been fortunate to study under some excellent composition professors, learning not only the skills of the trade but also seeing how role model professors teach courses to inspire their students.”

Kyle Griffith became enticed by music theory as a young child beginning piano lessons. As he entered the music composition-theory field in my collegiate years, he found himself assisting many other students with coursework as a tutor would and even took a James Scholar program course that incorporated independent Music Theory tutoring for the underclassmen core theory courses.

He lives in Seattle and enjoys traveling to teach his private lessons, and he is quite flexible with scheduling.

As Beethoven suggested, “Music is one incorporeal entrance into the higher world of knowledge which comprehends mankind but which mankind cannot comprehend.”