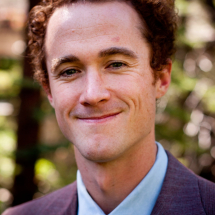 Kevin Larkin grew up in a musical family in Troy, Michigan and has been teaching at Westwoods since 2011. He began playing piano at an early age and got his first guitar when he was 16. He graduated from the University of Colorado in 2004 with a degree in Structural Engineering. While in college he discovered Celtic and Bluegrass music and began writing songs and performing at open mics. In 2006 he moved to North Mississippi and founded the Mayhem String Band. The bluegrass band performed over 200 shows a year across the country and got to open for BB King and the Avett Brothers. While in the South, Kevin learned the harmonica and accordion and began producing music in the studio. In 2010, after the band decided call it quits, he moved back to Colorado and started Chimney Choir. They have toured all over the country and have performed at Red Rocks, the Arvada Center, and the Bluebird. Their shows usually include dancers, actors, projection and comedy. In 2015, they wrote the full length ballet Boomtown with Denver based dance company Wonderbound. This year, Chimney Choir received the Career Advancement Award Grant from the Colorado Creative Industries and performed at the Governors Award Ceremony.

When not teaching or playing with Chimney Choir, Kevin produces electronic music and likes to go camping in the mountains. He loves Westerns and books about science. Most of all, he loves sharing music with anyone, anytime, and anywhere!