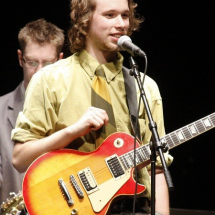 Guitarist and composer Keith Adams (b.1988, Silver Spring, MD) graduated Magna Cum Laude from McDaniel College in Spring 2010, earning a B.A. in Music Theory and Composition with a double-minor in Writing and Jazz Studies, and is currently attending Towson University for his Masters in Music Composition. Adams has studied Classical guitar with Kathrin Murray and Troy King, Jazz guitar with Tim Jenkins and Steve Herberman, and has performed as the principal guitarist in many student ensembles at McDaniel College. Adams served as the President of the Music Honor Society (Beta Alpha Chi), received the Class of 1938 Award for Excellence in Music, and earned the Kennedy Center Certificate of Merit in Composition for scoring a production of Lorca’s tragedy, Blood Wedding.

Since 2005, Keith has been teaching Jazz, Classical, and Rock guitar to students of all ages throughout Maryland, and has played many styles–including Reggae, Mariachi, Punk, Samba, Music Theatre, and Madrigal–professionally for almost ten years, taking the stage at venues such as the Meyerhoff, the Hippodrome, the Recher Theatre, and the Kennedy Center. Keith is currently crafting new music for the screen and stage, locally and internationally, while also writing and performing original music with his brother Greg in their indie- rock band Turtle Buddy, their experimental pop-group SteamGah, and their progressive Jazz Quartet: firetruck.