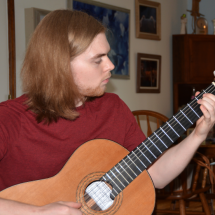 Born on Long Island in 1993, Keil Gries was drawn to a career in music
at an early age, performing on the guitar in popular music and recital
settings throughout his youth in New York. During his early college
years, Gries began to develop a deep appreciation for the classical music
repertoire. In 2013,this would culminate in a decision to begin studying
classical guitar under Dr. Eladio Scharron at the University of Central
Florida. In the summer of 2015, Gries was invited to Puerto Rico to
perform at the 3rd Annual “Festival Internacional de Guitarra Clasica”.
Whilst abroad he participated in several masterclasses conducted by
world class players, Javier Bravo and Dieter Hennings and was
encouraged to return annually. Gries currently resides in Orlando,
Florida where he enjoys teaching/performing and is actively pursuing a
BM in Music Performance and a career as a soloist on classical guitar.