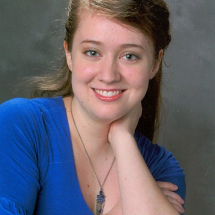 Soprano Katherine Crowe received her Bachelor of Music in Vocal Performance from the Eastman School of Music, where she was a Howard Hanson Scholar and studied with Metropolitan Opera artist Katherine Ciesinski. Throughout her undergraduate studies, she performed roles in multiple Eastman Opera Theatre productions, including Franz Lehr's "The Merry Widow", Francis Poulenc's "Les mamelles de Tirasias" and John Kander's "Cabaret", in addition to various solo and chamber music recitals. Katherine's senior recital featured chamber and contemporary works, including the premiere of an Emily Dickinson song cycle for voice and piano and a full orchestral performance of Heitor Villa-Lobos' "Bachianas Brasileiras No. 5" for soprano and eight cellos.

In addition to her vocal training, Katherine was selected to be a member of Eastman's Institute for Music Leadership's Arts Leadership Certificate Program at Eastman, through which she received a grant to intern at the Washington National Opera, was a Generation E-Student Scholarship Recipient, and coordinated the rohr(BACH) event at Rochester's Rohrbach Brewing Company. She also studied fencing and theatre at the University of Rochester, where she served as music director and performed the role of Julie in the UR International Theatre Program's production of Georg Bachner's Danton's Death. While at Eastman, Katherine received additional training in private piano lessons and in vocal pedagogy.

A Baltimore native, Katherine has recently returned to her hometown to open a private voice and piano studio and to continue studying voice with Ruth Drucker.

Check Out Our Baltimore Music Teachers