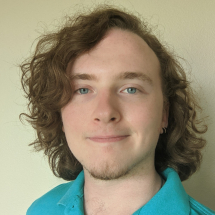 Since beginning his musical journey at the age of four years old, Julian Ayres has been an active musician within his community. His earlier years were spent with the Renaissance Music Academy of Southwest Virginia, in which he had the pleasure of being tutored under the classical violinists Vladimir Kromin, Bryan Matheson, Kevin Matheson, and David Ehrlich. In addition to violin, Ayres has gone through independent studies involving guitar, drums, and voice. Trying for something fresh, while still exploring his passion for music, he is currently a student at Full Sail University to major in Cyber Security and minor in music studies.

Some of Ayres’ earlier performances include quarterly recitals with the Renaissance Music Academy, and visits to local hospital patents for annual Christmas music. During his time with RMA, Julian Ayres had performed alongside other professional musicians within the RMA chamber orchestra, held the honor of Concert Master within the Roanoke Youth Symphony Orchestra, and performed with Patrick Henry Community College’s Patriot Players of Martinsville Virginia. Additional performances have included group sessions, weddings, and competitions centered around Martinsville/Bassett Virginia.

Ayres has a natural talent for teaching. His earliest experiences consist of math and chemistry tutoring for his peers at Patrick Henry Community College. In addition, he has had many successful violin students within his hometown of Bassett Virginia, who continue to explore the art even to this day. Ayres was brought up using the Suzuki Method, which centers itself around classical style violin, and utilizes it as a baseline for his own students. To keep things fresh and fun, as well as to provide additional perspective, music from outside of the classical genre is occasionally implemented.