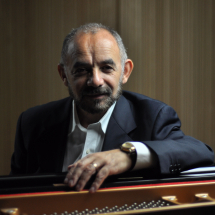 Jose R. Gallegos studied classical music and piano at The National University of Bogota Colombia from 1960 through 1967.

In 1968, he moved to New York City to continue studies of composition, arranging, orchestration and music production at the Brooklyn Conservatory of Music and The Manhattan School of Music. In 1977, he studied jazz orchestration and film scoring with the maestro, Mr. Don Sebesky,

In 1969, Jose started his career as a producer, pianist, arranger and composer. He worked with Harry Belafonte, Tom Jones, Shirley Bassey, David Byrne, Tito Puente, Paquito D'Rivera, Celia Cruz,as well as The Machito Orchestra, to mention only a few.

Jose is the recipient of 38 different awards for Broadcast and Music production for TV, radio, film and digital media. He and his company played a vital role with Fortune 500 companies and general market advertisers to effectively reach out to the emerging Hispanic Market in the USA.

Since 2011, Jose dedicates his time training and preparing musically gifted youth, musicians and producers for scholarship auditions at numerous highly competitive and renowned universities within the USA, as well as Europe.