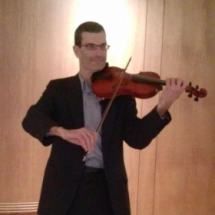 Violinist and violist Jonathan Graber has appeared as soloist, Concertmaster, principal player, or conductor with groups throughout the United States, Europe, and Central
America. He has held full-time teaching positions at Allegheny College, Dickinson College, The Bloomsburg University of Pennsylvania and, most recently, the National Autonomous
University of Honduras, where he taught for nine months as a Fulbright Scholar. While in Honduras, he served as Visiting Concertmaster and appeared as soloist with that country's
national symphony. Currently, he is an adjunct professor of Humanities at Vincennes University/Navy Base Kitsap.

An advocate of educating the next generation of musicians and lovers of music, Jonathan has served as coach or conductor with many youth-orchestra programs, serves as a
regular music tutor with various school districts, and maintains an active studio of private students.

Jonathan began his musical career on the piano and he enjoys teaching that instrument. He accompanies his and other teachers' students in recitals as well as in competitions/
adjudications. In addition, as a result of his coaching experience, Jonathan has learned the basics of cello pedagogy and teaches beginning students on that instrument.

Jonathan has published articles and reviews in American Music Teacher and American String Teacher, presented papers at meetings of the Association for Technology in
Music Instruction, the College Music Society, and the Society for American Music, and held a Younger Scholars Grant from the National Endowment for the Humanities. He holds
a Master of Music degree from the New England Conservatory of Music and a Doctor of Musical Arts degree from the University of Washington.