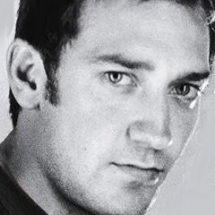 Classically trained in piano from the age of seven, John Contos grew up
in a 1920s farmhouse built by his Norwegian great- grandfather that
stood surrounded by orange groves northwest of Orlando. Contos’
grandmother faithfully drove him to formal piano lessons and recitals in
central Florida until his teens.

Contos won Richter and Sudler fellowships at Yale University for his
short films, which he also musically scored. While continuing to train at
piano, he began teaching himself guitar and writing songs in Los
Angeles. In addition to acting in a feature film, commercials and
graduate films at University of Southern California, Contos worked for
entertainment companies such as MGM, Warner Bros. and United Talent
Agency.

In addition to building a piano repertoire of works by Beethoven,
Mozart, Chopin, Grieg, Satie and Stravinsky, Contos pursues intense
scholarship of composition and orchestration from works by Bach, Holst,
Rimsky-Korsakov and Schoenberg. No stranger to both icons and
oddities of rock, jazz, country and hip-hop, Contos’ students join him in
a listening curriculum that ranges from Persian classical music to the
film soundtracks of Nino Rota and Bernard Herrmann.

Returned to his hometown of Orlando, Contos is growing as a composer
of music for films, games, attractions and events. As the bandleader of
several lineups, he has performed guitar, vocals and keyboards at
venues such as Back Booth, Peacock Room, Stardust and Copper Rocket.
Contos is planning to work with Rollins College’s Dr. Crozier and the
Bach Festival Orchestra to score the science fiction adventure “Vortex
Nebulae” shooting in Orlando Fall 2014.