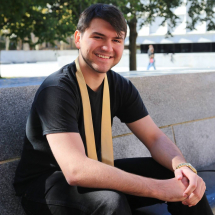 John Baxter was born in Hattiesburg, Mississippi. He began his musical study with piano lessons at the age of 8 and began composing at the age of 13 while also learning the guitar and violin. After matriculating at Yale University, John started arranging for his choir groups and pops orchestra. Also while at Yale, John began his conducting career, beginning with his choir group, Pitches and Tones.

After graduation, John received acceptance into New York University's Film Scoring program. Since then he has worked on more than 40 films, commercials, television programs, and
video games with directors from around the world such as Greece, Australia, Canada, and Great Britain.