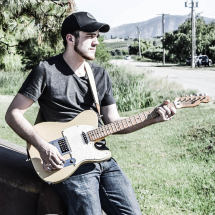 Jesse James Russell began playing guitar at age 8 and performing at age 10. Growing up in a rural community in Eastern Washington, he has always had a strong appreciation for blues, country and roots music. Mostly self-taught, Jesse did not have many opportunities to get lessons or play with other musicians because there were not many opportunities in the area. Instead, his family chose to spend their summer vacations traveling to blues festivals all around the state of Washington in a vintage travel trailer. As a result, Jesse was exposed to a wide range of influences and styles as he met and exchanged ideas with local and touring acts.

At age 13, Jesse received a scholarship to attend the weeklong Acoustic Blues Workshop by Centrum in Port Townsend Washington where he was able to study with legends in the Genre such as Daryl Davis, Phil Wiggins, Mark Brooks, and Rich Delgrosso. Jesse has returned on scholarship to Centrum three more times. In addition, he struck up a lasting professional relationship there when he impressed international touring blues musician Terry Harmonica Bean, who hires Jesse to play guitar in his band when he tours on the west coast.

At age 15, Jesse sat in with Grammy award-winning blues guitar player Buddy Guy when his tour passed through Jesse's hometown.

Jesse moved to Seattle in 2013 to attend the University of Washington studying Mathematics and Spanish. His blues band, Jesse James and the MOB was voted Best New Blues Band by the Washington Blues Society, and Jesse also founded an Americana group called James and Montgomery. Jesse also plays bass in the Brett Benton Blues Trio, winner of Washington Blues Society's International Blues Challenge Contest. In addition, Jesse is a member of the house band hosting an all-ages blues jam every Tuesday in Everett, WA.