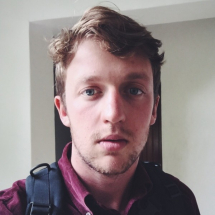 Seattle Guitar Teacher Jesse Miller started playing guitar when he was eight years old, and began writing music soon thereafter. He has studied jazz and classical guitar under Fred Hamilton at the University of North Texas and spent a summer in the Volta region of Ghana studying West African drumming and rhythm with Gideon Alorwoyie. He has been the leader of the rock group Señor Fin for the past four years and has played guitar in a variety of jazz, rock, and pop groups. He is an actively touring, gigging, and recording artist who is involved in the Seattle music scene.

Jesse Miller has a passion for teaching music lessons and believes that music can be an invaluable force in a young person’s life. He loves to share what he knows and to learn from those he teaches. He considers building friendships and being a musical mentor to be just as important as being an instructor.

Outside of music, Jesse Miller is a practicing photographer, poet, long distance runner, outdoor enthusiast and world traveler. He has a passion for anthropology and ethnomusicology, is a fervent reader, and loves going to concerts. Life long pursuit of knowledge is Jesse’s biggest goal, and teaching guitar is a big part of that journey.