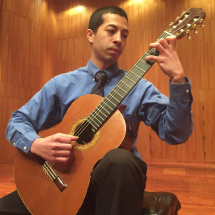 Jeremy has won many competitions throughout his musical career; In March of 2015 Jeremy was a finalist in the James Stroud All-Ohio Guitar Competition held at the Oberlin Conservatory of Music; In the Summer of 2015 he was a finalist in the Southern Guitar Festival and Competition held in Columbia, South Carolina; In the 2016 he was the 2nd prize winner of the James Stroud Guitar Competition and the 1st prize winner for classical guitar in the 2016 Tuesday Musical Scholarship Competition at the University of Akron; He was also the second prize winner in the subsequent Tuesday Musical Scholarship Winners Concert!

Jeremy Avalos is an advocate of artistic self-expression, self-exploration, and emotional vulnerability manifested through music performance. His musical interests range from the infectious nuevo tango of Argentina's Astor Piazzolla to the cerebral modern guitar works of Hans Werner Henze. His musical philosophy stems from the intersection of narrativity and music. His most recent project was an exploration of Henze's Royal Winter Music sonata for solo guitar, a collection of Shakespearean character portraits.

Jeremy enjoys an active teaching schedule with students of all ages, skill levels, and playing interests. He considers it a great privilege and responsibility to educate the next generation of music-minded individuals.