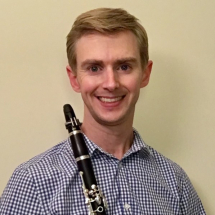 A native of Chapel Hill, NC, clarinetist Jason Spencer holds degrees in clarinet performance from the University of Michigan and the University of North Carolina at Greensboro. An active performer, Jason has performed with the Greensboro Opera, Greensboro Symphony, Salisbury Symphony, and Eastern Festival Orchestras. Previous awards include being selected as a winner of the Eastern Music Festival concerto competition, and first prize in the NC Federation of Music Clubs and Greensboro Music Teacher Association competitions. In 2008, Jason was selected to perform with the National Collegiate Wind Ensemble in Carnegie Hall, under the direction of H. Robert Reynolds.

While a graduate student at the University of Michigan, Jason performed with the University Symphony Orchestra, Philharmonia, Symphony Band, Concert Band and Contemporary Ensemble. He can be heard on numerous recordings with the University of Michigan Symphony Band and UNCG Wind Ensemble on the Equilibrium Label. Jason has appeared in masterclasses with Stanley Drucker (NY Philharmonic), Anthony McGill (Metropolitan Opera), Alan Kay (Juilliard) and Howard Klug (Indiana University). Previous teachers include Chad Burrow, Kelly Burke, Anthony Taylor and Donald Oehler.

In lessons, Jason is committed to providing each student with the opportunity to develop technical skills and musical expression through the exploration of scales, exercises, etudes, solos and duets. His teaching philosophy is based not only around the study of the instrument itself, but also the importance of music theory, as it is the basis for all repertoire. Every student learns differently, and Jason makes sure to customize each lesson in a way that helps the student understand the music and reach their potential.