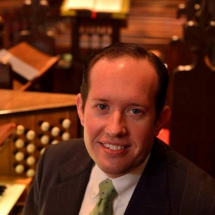 Dr. Jason Farris is the Director of Music at Grace Episcopal Church in The Plains, VA. He plays the organ for all worship services, conducts the Grace Church Choir, and serves as the Artistic Director of the Grace Church Concert Series. He teaches piano students of all ages and abilities.

Jason comes to the Washington D. C. area from The University of the South in Sewanee, TN. As a visiting assistant professor of music, he taught applied organ lessons to both undergraduate and graduate students, as well as undergraduate courses in music theory and a graduate-level church music course. As the Associate University Organist and Choirmaster, he directed the music programs in two campus chapels and conducted the University and Seminary Choirs. Prior to these positions, he was the Assistant University Organist at The University of the South. In addition to playing for campus-wide liturgies in All Saints' Chapel and the School of Theology's worship services in the Chapel of the Apostles, he also accompanied the University and Seminary Choirs. In 2011, he was the organist for the University Choir's residencies at the Anglican Cathedrals of St. Alban, Rochester, and Canterbury, and is featured on the choir's latest recording, "O Praise God In His Holiness: A Three Cathedrals Tour."

He was awarded the doctor of musical arts degree in organ performance at the University of Houston where he studied with Dr. Robert Bates. He earned bachelor and master of music degrees at Baylor University as a student of Dr. Joyce Jones. He is a member of Pi Kappa Lambda and Alpha Chi academic honor societies, and was the second place winner in the graduate division of the 2003 William Hall Organ Competition (San Antonio). On separate occasions, he was awarded scholarships to attend the British Organ Music Seminar in London, England and the French Organ Music Seminar in Paris, France. Active as a collaborative artist, he accompanies vocalists and instrumentalists at the piano, and has performed with multiple church and university choirs at the organ. Previous organ recital engagements include Christ Church (Episcopal) in Cranbrook, MI, the Philadelphia Cathedral (Episcopal), Christ Church Cathedral (Episcopal) in Nashville, TN, St. Paul's Episcopal Church in Chattanooga, TN, and the Co-Cathedral of the Sacred Heart (Roman Catholic) in Houston, TX.