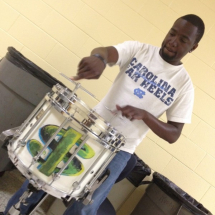 Jami’ Fennell is originally from Walterboro, South Carolina. He attended Western Carolina University where he studied percussion with Dr. Mario Gaetano. While attending WCU he performed in the percussion, jazz, wind and gamelan ensembles. He was also a member of the Pride of the Mountains Marching band where he served as the section leader and was Most Outstanding Performer for the 2001 season. Jami’ was also a member of the Spirit of Atlanta Drum and Bugle Corps from 1999-2001, and in 2001 he was named Most Outstanding Performer. He also attended Jacksonville State University where he studied with Clint Gillespie and Tracy Tyler. While attending JSU he was a member of the Marching Southerners and the JSU PASIC line, and was the 2003 Most Outstanding Performer.

Jami’ holds a Bachelor of Arts degree in music from JSU. He has also taught several highly respected drum lines throughout the South including: Spirit of JSU, Jacksonville State University, Kennesaw Mountain High School and Lassiter High School. From 2008-2010 he worked in Birmingham, Alabama as a member of the DoubleStop Percussion team. Currently he lives in Atlanta where he is the Percussion Coordinator for the Georgia State Marching Band and also works with the McEachern High School band.