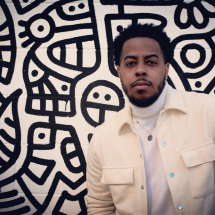 Jairus McClinton is a vocalist and saxophonist who has been performing with both instruments for over 15 years. He graduated from Alcorn State University with his Bachelors Degree in Music. He is very excited to aid the youth in learning and loving music.

Born and raised in Memphis, Tennessee in the Westwood community, Jairus McClinton has been singing and performing since the 4th grade. He first realized his ability to sing in the church and later when asked to audition for his school’s Christmas play, he realized that he had a raw talent for performance as well!

The more he grew into his gift, the more he began to expand as a singer and musician! Jairus started writing songs at an early age. While in elementary school, he would copy down the lyrics to popular songs just to see how the words were patterned, and by the time he was in the sixth grade, he started writing his own songs.

He joined his high school band in 2009 and began fluently reading music. This began his passion for not only singing but music as a whole. That same year he recorded his first hook with a rap group named ‘Street Unit All Stars’ and began working closely with ‘DJ Robert’ and ‘Yungboi Starr.”

After graduating from high school, Jairus attended Alcorn State University. While enrolled he led many solo performances for their Concert Choir, Men’s Chorale, and other various ensembles. His friends and him also began to build their own music talent group geared towards recording independent artist on campus as well as himself. His first solo single under the group ‘Vybe Music Productions’ was “Patience (2016)” produced by ‘JaySpinnah.’ At the time his artist name was “JayMack” since that is what everyone called him.

Since graduating from Alcorn, he has recorded many remakes of popular music that can be found on his YouTube Channel and SoundCloud. His highest streamed (Remix/Mashup) charts at 152.9k streams. Later this year he is releasing his first EP titled “Two sides To a Story” produced by “MidasOntheBeat” and “JaySpinnah”

He currently lives in Dallas, TX looking to network and expand his reach as an artist. He has began performing at local open mics and competitions and is tirelessly working on new music and sounds.