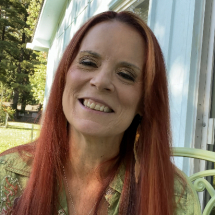 Holly grew up in a musical family, her father was a classical pianist and her mother was a country singer-guitarist. As a result, she learned classical piano as pop/folk guitar as there were always instruments in the house. As a young child, she tagged along to her mother's gigs and sang along, sometimes with her siblings. Growing up in such a musical house laid the foundation for her life-long passion with studying music and performing.

Holly began playing trombone in elementary school, something she continued on through college. She was fortunate enough to have a high school band program that covered classical, traditional brass band as well as jazz studies. For several years, she won places in All-State Band as well as All-State Jazz Bands. At the same time, she played keyboards in rock bands with her older brother, something she continued to do throughout high school. This variety of performing and educational experience solidified her desire to learn and grow both as a teacher and as a performer. It was towards the end of high school that she discovered her passion for electric bass, her primary instrument to this day, and began studying it in earnest.

Holly studied music in college at Morehead State University and then at Belmont College in Nashville and has a Bachelor of Arts degree, cum laude. She moved from Nashville to Los Angeles to attend Musicians Institute of Hollywood, where she graduated from both the electric bass and vocal programs. After graduating from MI, she taught in their summer programs and balanced her teaching and performing life. She spent many years in Los Angeles making her own records as well as playing for other well-known names in the music business. She also graduated from the recording engineering school at The Recording Workshop in Chillicothe, OH so has a good technical background as well.

After moving to the east coast to raise her family, Holly began her own band which plays regularly in the DC area, as well as working with many other bands and venues. She taught for more than six years at local music schools -- teaching voice, piano, guitar and bass - all instruments that she loves to play and teach. Holly's approach to teaching is to blend the most efficient technique with songs that are fun to play, and makes sure that an understanding of why things are done the way they are is part of her lessons.