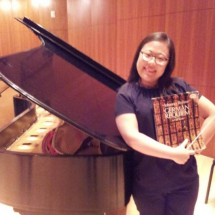 Hanna Lee is an active professional choir director as well as a private piano and cello instructor. She was born and raised in South Korea where she graduated from Kay-Won High School of the Arts with a major in cello and was awarded a bachelor degree at Seoul Theological University in music composition. She is a recent graduate of Georgia State University where she earned a Master of Music degree in choral conducting.

During graduate school, she was an assistant conductor of Women's choir and Master Singers at GSU and Georgia Tech (2012-2013).

She has also attended several conducting Master classes as a conducting fellow working with Dr. Jerry Blackstone, Dr. William Weinert, Dr. Daniel Bara and Dr. Edward Maclary. She was selected to participate in the National Collegiate Choral Organization master class with Dr. Joseph Flummberfelt in 2013. She has accompanied several choirs in Atlanta area and also played cello in orchestra.