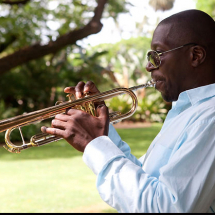 One of the most intense and passionate trumpeters on the DC jazz scene, Freddie Dunn Jr is described as “fire and ice”. Active professionally since 1992, the horn is truly a paintbrush in the hands of this gifted, melodic trumpeter. As a musician and educator, Freddie teaches all brass areas and piano.

Freddie Dunn, Jr. cut his teeth in the frenetic music scenes of New York and New Jersey. He is a former student of William Burkhardt, Wayne Cameron, Alan Colin, Cecil Bridgewater. and Bill Warfield. He holds a bachelor’s degree in classical trumpet from the University of Maryland Baltimore County and is in high demand for solo and section work on the east coast corridor. He has traversed the world a few times over with the bands Fertile Ground, The Terry Koger Quintet, The New Volcanoes, and his own Freddie Dunn Quintet/Quartet. He is prominently featured on the Lafayette Gilchrist & The New Volcanoes CD, “Soul Progressin’”, which garnered 4 stars (out of 5) in Downbeat Magazine and he has the solo on the title tune which was featured on the critically acclaimed cable series “The Wire”. He is a member of the groundbreaking soul-jazz outfit, Fertile Ground, and appears on their discs: “Black Is…”, “Seasons Change”, and the seminal, “Spiritual War”.

His trumpet and flugelhorn work can be heard on diverse musical projects from the dance music of the Basement Boys (“The Casbah”, “Til I Found You”) to the Hip Hop Ensemble’s “Give Me The Jazz”, to the straight-ahead of Indigruuv, to the Jazz-Funk Avant-Garde fusion of the New Volcanoes. His band and solo shows have garnered notice from the Washington Post, Express, and The DC Examiner. Through his web-based organization, Save the Jazz, he hopes to raise awareness, and interest in Jazz music of all stripes in Washington, D.C.

As a teacher, Freddie strives to make music fun and accessible for his students — no matter the instrument. Lessons are carefully tailored to the interests and progress of each student so that success drives confidence which in turn keeps the learning fun. As a seasoned teacher and performer, Freddie is able to seamlessly include aspects of music including practice, performance, endurance and pacing, reading, theory, classical, commercial and jazz interpretation. In the realm of brass, he’s a big fan of the Essential Elements and Arbans series. For piano students, he enjoys incorporating the Alfred and Faber methods for a holistic musical approach. As a foundational instrument, he enjoys working with beginners, especially, on piano, as this study leads organically into all instrument areas.

Freddie’s primary goal with students is to cultivate a love of music, personal taste, and a skill set that can last a lifetime!