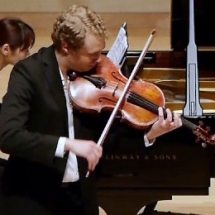 For many of us, we can trace the birth of our love and passion for music to a single moment. Something we experienced, saw, or heard flicked a switch sending us on this incredible journey through the world of music. For Evan, that switch was flicked when his 3rd grade teacher brought her violin to class and played the Flinstone's Theme Song on Violin and he went running home after school and begged his parents to sign him up for orchestra. Between that moment and where we are today, Evan has taken many years of Viola, Piano, and Trombone lessons while also teaching himself Guitar in his spare time.

When it became time to pick one instrument to study seriously at the at the collegiate level, Evan chose to stay with his first love, the Viola.
Evan completed his Undergraduate studies in Viola Performance from The Boston Conservatory. While in Boston, Evan was a busy freelancer playing in dozens of Opera productions, quartet performances, and soundtrack recordings for Video Game and Movies.

Following the completion of his undergraduate degree, Evan attended The Jacobs School of Music at Indiana University, Bloomington where he has just completed his Masters in Music, Viola Performance this past spring.

With a special focus on orchestral playing and technique, particularly during his graduate studies, Evan brings that same focus on technique and efficiency to his teaching philosophy.
A focus on proper technique and setup, quality of tone, and accuracy of pitch are the three pillars of Evan's teaching philosophy and he has taught students ranging in age from 5 to 90! After many years of taking private lessons at every level Evan understands that the learning process can be very frustrating at times, so finding that balance between lesson substance and fun is crucial.