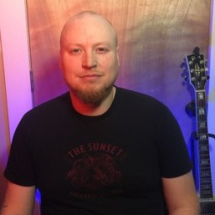 Evan Hulse grew up in Seattle, WA. He started playing music when he was 10 years old and quickly realized he wanted to understand all about how music worked!

Evan began his musical journey playing the recorder in grade school and singing along with his class while his 3rd grade teacher played piano. Eventually, Evan joined the school band, playing trumpet in the 4th grade. In junior high, Evan began playing classical guitar and writing poetry. Soon enough, he was learning bass guitar and switched from writing poetry to writing lyrics in high school. Evan sang in choir through junior high and high school and also played French horn and upright bass! At home, Evan grew up with an upright piano and organ in the house and played around on those frequently. All in all, Evan has been constantly surrounded by music!

By age 18, Evan started his teaching journey by showing a classmate what he had learned on bass guitar. The conversation enabled him to continue his music theory education in college and realize the full understanding of how it worked. Evan learned to record songs starting with a cassette 4 track in junior high, and eventually he ran live sound for many of his friend’s bands. With this, Evan ended up studying performance and audio engineering in college and earned an associates degree at Shoreline Community College. Evan also studied lyric writing in depth and teaches that as well!

Evan has played in several bands at many local concerts and small music venues. He enjoys writing songs and is currently in the process of recording his own original work. Evan is very fond of the modern rock and Americana genres and he loves sharing the joy of playing and creating music with others who have the same curiosity about it!