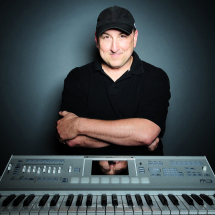 Eric Copeland has been composing music and playing the piano since he was 13. His mother and grandmother were both piano teachers, but Eric definitely took a different road in music. Eric began playing keyboards and synthesizers along with piano eventually touring with a band through the midwest and with bands in Chicago. But composing and producing music would turn out to be Eric’s “true” calling and he built a business working with and teaching people how to become musicians, songwriters, producers, and composers. Working with the top musicians, producers, and studios in the world in Nashville, TN, to now working in the Orlando, FL area with the amazing talents here, Eric has helped hundreds of students, clients, and more develop their music career.

Eric received his Master’s degree in Music with a focus on Composition from the University of Central Florida, and a Bachelor’s degree with a focus in Music History and Music Business at Middle Tennessee State University outside Nashville. He continues to help people around the world and right here in Orlando grow as musicians, players, composers, producers, and more.

As a teacher, Eric believes strongly in a well-rounded approach that involves learning to read music, basic and important music theory, music composition of course, as well as why music history can be fun, and also how to play by ear which is rarely taught well in lessons. Every student and client of Eric’s usually stays in touch for years after for music career advice, to talk music, and just catch up.