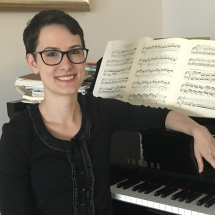 Elizabeth Stoner’s formative years as a musician began early with her first lessons at the age of 5 and her first public performance at age 7. The majority of her training is in the classical Russian tradition, having studied with pianists Marina Agrest and Svetlana Velichko, though she is also well versed in jazz and ragtime playing, having studied with piano pedagogue Dustin Stephens and through specialized master classes. After receiving a Bachelor of Music in Piano Performance from Furman University in 2014 under the direction of David Gross and Derek Parsons, she completed a Master of Arts in Historical Musicology from the Jacobs School of Music in Bloomington, Indiana where she studied with J. Peter Burkholder, Giovanni Zanovello, and Giuliano Di Bacco. She continued her studies independently at Jacobs School of Music, specializing in historical and experimental music theory under the guidance of Giuliano Di Bacco and Frank Samarotto.

With over twenty years of performance and competition at festivals in the United States and Europe on the piano and organ, Elizabeth commands a vast knowledge of the current concert repertoire. Her recently performed works include Mendelssohn’s Concerto No. 1, Gershwin’s Rhapsody in Blue, and Shostakovich’s Concerto No. 1 for piano and trumpet, as well as the chamber music of Bach, Beethoven, Schubert, and numerous solo works. Though she enjoys performing for audiences, she has found great meaning and inspiration in teaching new pianists and refining the technique of experienced young musicians. She has taught piano and music theory to all ages, ranging from the most elementary levels to advanced collegiate and post-graduate instruction. Many of her students have gone on to study at collegiate levels, participate in festivals, and become active performers.