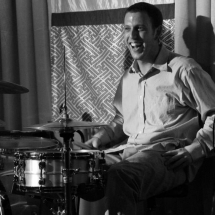 Eli Mueller began his love of drumming before he received his first drum set when he was 9 years old. Playing and studying drums in both private lessons and high school jazz band, Eli continued on studying music in College. He received a Bachelors studying music performance, theory, composition, production and improvisation from Naropa University in Boulder, CO. Eli has studied jazz, rock, pop, reggae, afro-beat, latin, soul, funk, hip-hop, RnB and electronic drumming. He spent several years studying percussion (Djembe and Congas) and playing in bands as a percussionist to help further his understanding of drumming as a whole. While in college, Eli began producing electronic music alongside drumming, leading him to learn more about production, composition, music theory and mixing music. Naropa University encourages contemplative education, mindfulness and meditation. This heavily influenced Eli's approach to playing and practicing music. It also led him to his love of teaching music and encouraging creativity in his students lives.

Eli has been teaching drum set and electronic music production / performance / improvisation since 2014. He has taught students of all proficiencies from beginner to advanced and offers drum and electronic music (Ableton Live exclusively) lessons. Helping students to find what they are passionate about musically and creatively while developing a practice plan that helps them feel encouraged and supported is a bright spot in Eli's life. A fundamental belief in Eli's teaching methodology is that students growth as musicians and creative individuals impacts their sense of identity, confidence and compassion in all areas of their life.

Ultimately, Eli stopped working in multiple projects in 2015 and has devoted his time solely to teaching and his band, Prize the Wild (Indie Electronic Pop / Soul). He relocated to Seattle from Denver, Colorado in December of 2017 with his band to continue writing, performing and teaching music.