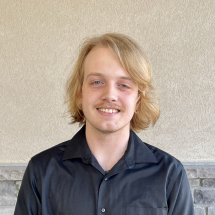 Dylan Conant is a young musician based in Denver. He has been playing guitar since the age of 8, and has been playing drums and bass since around age 12. He quickly developed a passion for writing, recording, and performing different styles of music.

Dylan attended Denver School of the Arts as a guitar major for 4 years, performing in over 20 live concerts for the school, including jazz, classical, and modern pieces of music. During his time at the school, Dylan often tutored other students in his class, and showed the ability to teach guitar at a young age. During this time, he also played bass in the wedding band Jaw Drop Jones, and began learning drums. Soon after, Dylan began showing an interest in producing music, and has spent the last few years creating music in Ableton Live, utilizing his skills with live instruments in his recordings.

As a teacher, Dylan hopes to help his students explore their full potential in music, not only to learn to play an instrument, but to inspire creativity and passion for music. He believes every student is capable of loving music and the instrument they play.