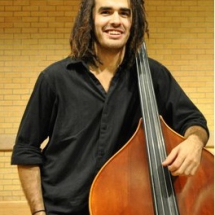 Looking to spread the joy of music and enlighten people of all ages, Devin has been teaching music privately for 10 years. A native, San Antonio, Texas, Devin grew up playing rock'n'roll drums with his father. At age 9, Devin began playing the electric bass, as it accompanied the drums well. He joined orchestra in middle school, where the bass (upright) became his avenue for expression and self-practice. After only a few months of practicing, Devin was competing at the highest level for his age group. He started performing in those years, playing on the River Walk and in several venues in the metropolitan area of San Antonio. In late high school, Devin decided to make a professional career out of music and received a full-ride scholarship to any school in Texas.

He attended the University of North Texas, where he received a Bachelor's of Music Education and a Bachelor's of Music Theory while studying with well known bass pedagogue, Jeff Bradetich. It was during these years that Devin's experience on other instruments grew tremendously. Studying all string instruments and taking piano studies very seriously, he began to teach more than just bass and cello. His love for singing also led him to become an active Chorus member at school and at different churches in his neighborhood. He graduated magna cum laude and is a certified to teach all grades in Texas.

After graduation, Devin taught orchestra, choir, and guitar ensemble at an all-boys public school (Gus Garcia Young Men's Leadership Academy) in Austin, Texas for three years. There, he held several on and off campus recitals and concerts, organized fundraisers, went on filed trips, judged region and district events, had several students be placed in region and district ensembles, and received superior ratings on stage and in sight reading with his groups each year. He also coached the soccer team (his first love). Devin is currently working on his Master's of Music Theory at the University of Colorado, Boulder.

Devin has performed every kind of music imaginable. From the hair metal of the late 80s to Eastern Javanese Gamelan, Devin has played it all. His favorite genres to teach are classical and jazz. As a teacher, Devin values his ability to adjust his teaching style to fit the needs of the student while maintaining the necessary consistency of practice habits in order to achieve the greatest results. He prefers to teach the "whole" musician, meaning developing ear and a sense ownership in students' practices/performances is crucial. His most valued attribute as a person is his ability to be mindful of and grateful for all things. He hopes, in teaching music, he can influences his students correspondingly.