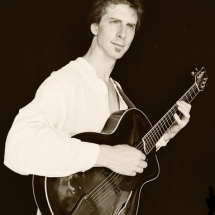 David Tiller works with all ages, from very beginners to very advanced students and teaches multiple styles including jazz, bluegrass, rock, gypsy jazz, celtic, swing, latin jazz, choro, and more with focus on technique, theory, groove, melody, improv, repertoire, confidence and fluidity. David has worked with young kids (focusing on making music fun) as well as advanced adults. He is currently an adjunct professor at Regis University, teaches guitar and mandolin private lessons in Boulder, CO., and was formerly the professor of mandolin and guitar at the College of Santa Fe. David has also been a touring musician with his band Taarka, and ThaMuseMeant, plus has been a side man supporting many other artists. David has also given workshops and has music camp instructor throughout the USA and internationally, including Mount Shasta Music Camp, Big Sur Fiddle Camp, and Escola Municipal de Musica Folk e Tradicional in Vigo, Galicia, Spain.

David began playing and studying music at age 8, and studied music the North Carolina School of the Arts for high school and was the first high school student ever to be admitted to the NCSA guitar program. David studied music at the Shenandoah Music Conservatory, for his earlier college years then later for further college studies studied at New School of Music in NYC. David pursued personal studies outside Universities for jazz guitar studies with brazilian guitarist Richard Boukas and the Colorado jazz legend Dale Bruning. David also furthered his mandolin studies with the likes of David Grisman, Andy Statman, Paul Glasse and Nile Hokkanen.

For David's professional performing life, he was a founding member of ThaMuseMeant in the 1990's and the band went on to becoming a successful national touring group, playing large festivals throughout the USA , sharing the stage with the likes of David Mathews Band, Blues Traveler, Ricki Lee Jones, and many many others also garnering a national recording deal and distribution. In 2002 David met Enion Pelta and formed the group Taarka, which was originally an all instrumental based compositions, and later incorporating songwriting and vocals. Taarka has continued to perform and travel nationally and internationally for the past 17 years and has had their music in a sound track for nationally released movie called "1971", first place winner of the Tribeca Film Festival and have played on PBS syndicated music programs such as Music City Roots and Bluegrass Underground.

David Tiller has been a side man musician throughout his performing career as well and has worked with Elephant Revival, James McMurtry, Danny Barnes, Michael Franti, Darol Anger, Peter Rowan and many many others.