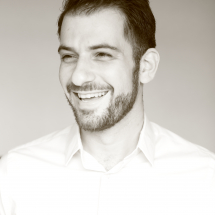 Daren Weissfisch is a conductor, oboist and educator who has conducted professional and student ensembles in the United States, Mexico and Europe for over a decade. He is also fluent in both English and Spanish! From 2013 to 2019 he was the artistic director, conductor and oboe teacher of the Sinaloa Esperanza Azteca Symphony Orchestra and Choir, which is an El Sistema based youth orchestra and choir in Culiacán, Sinaloa, Mexico whose mission is to make better human beings through music. The program was open to anyone from the ages of 6 to 20+ and offered the opportunity to study music free of charge. In his 7 year tenure as artistic director Daren worked with over 300 kids and young adults to build self-esteem, instill a love for music and reinforce values including team work, honesty, integrity, discipline and determination.

Originally from New Jersey, Daren began his oboe studies at the age of 10 and at 13 was playing in honors orchestras and bands throughout the state, including the New Jersey All-State Orchestra. He continued his studies in music theory, composition and solfege at the Juilliard Precollege and the Manhattan School of Music Precollege in New York City. Daren earned a Bachelor's summa cum laude and a Master's in oboe performance from the Hartt School at the University of Hartford in Hartford, Connecticut and the University of Colorado at Boulder respectively. While there he won several competitions and received honors for his playing as a chamber musician, as a soloist and for humanitarian work organizing a benefit concert to raise money for earthquake relief in Haiti in 2010.

Daren has participated in various music festivals including: The Pierre Monteux Festival, Interlochen, the Eleaza del Cavalho Festival in Fortaleza, Brazil, Eastern Music Festival and C.W. Post Chamber Music Festival. He has also been a participant in masterclasses by many influential oboists such as John Mack, Eugene Izotov, Elaine Duvas and Ray Still among others and conductors including Edward Cumming of the Hartford Symphony Orchestra, Linus Lerner of the Southern Arizona Symphony Orchestra, Donald Schleicher of the University of Illinois, Carlos Spierer of the Orquesta Sinfónica de Minería in Mexico City, Lior Shambadal of the Berliner Symphoniker, Charles Olivieri-Munroe of the Cracow Philharmonic Orchestra and Gábor Hollerung of the Dohnanyi Orchestra Budafok in Budapest, Hungary.

In his personal life Daren is an avid dog and cat rescuer and loves to play basketball and ultimate Frisbee.