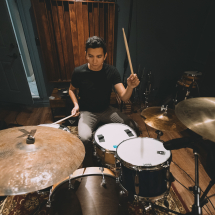 Daniel Yacaman was born in San Pedro Sula, Honduras and moved to Miami to pursue a degree in Music. Coming from a family of musicians, Daniel has been playing music since 2007. He teaches drums, piano, guitar, music theory, audio engineering and music production.

Daniel obtained his A.S. in Music and Production from Miami Dade College with a background in contemporary and pop music. He is an active member of the Miami music scene as a professional session drummer for local music producers that have placements in TV and film. Also, Mr. Yacaman is a Music Producer for commercial music.

Daniel specializes in various music genres including: rock, pop, funk, jazz, gospel, punk, and fusion. He has a strong passion for teaching and creates a Fun, positive, and welcoming environment in order to learn music.