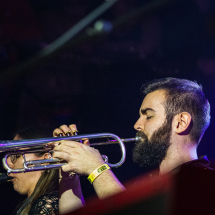 Daniel is an active trumpet player with experience with multiple instruments and musical styles based in Seattle, WA. He graduated from Western Washington University in 2017 with a bachelor’s in trumpet performance. He studied both traditional music theory and jazz theory.

Since graduating, Daniel has been touring nationally and internationally with the Portland-based band Marchfourth and his own project Motus. His work has led to him to share the stage with several artists, including Eric Krasno and Allen Stone. He also performs locally in Seattle pit orchestras, most recently in Seattle Gilbert and Sullivan Society’s production of “Cabaret”. Along with performing, he has prevailing passion for education. He has worked privately as a trumpet, piano, and guitar teacher since 2012. He also taught a jazz combo at his alma mater. He believes the most important part of music education is fostering creativity and a love of music.