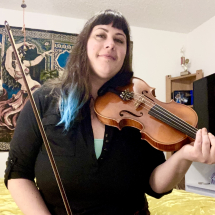 Christina takes pride in teaching violin and vocals. She has always been fascinated by music. At age 4, she told the world that she was going to be a singer. Then, at age 10, she chose violin out of a plethora of other instruments to play in the school orchestra. At age 11, she was begging her violin teacher to help her learn Scottish fiddle music. At age 14, she was battling stage fright and shaky legs during recitals. Towards the end of high school, Christina emerged as a self-proclaimed artist. She could be found in her basement alone getting lost in melancholy scales and melodies, writing her own songs, and dreaming of her future.

The following 8 years were spent studying Anthropology, Herbal Medicine and Meditation. Christina got her BA in Anthropology at the University of California in Santa Cruz in 2009. At age 22, she moved to Thailand for a year to work as an English teacher, which she really enjoyed. Upon her return from Bangkok in 2011, Christina got a job working for a sustainable biofuel company in Boulder, Colorado. Christina then decided to attend the Colorado School of Clinical Herbalism in 2016 where she obtained a 1,000 hour certification. She focused on her health the next few years and found that herbs were a major ally for her singing voice and immune system in general. In 2018 Christina got hired as an Herb teacher at The Academy of Natural Therapy where she taught for the next four years. Christina also attended a special school called The Boulder Psychic Institute for 3 years where she learned advanced meditation techniques.

Throughout all these years, music never left her side, not even for one day. She sang her heart out on a regular basis, and she jammed with as many different musicians as she could find. All throughout her 20’s Christina wrote lyrics, songs and melodies. Sometimes she would even wake up in the middle of the night just to record a new song with her phone. Art De Funk, The PaddyShaggers, The Willow Jon Show, Potcheen, Tumbleweeds and Girl Pockets are a few of the groups Christina has been involved with over the years. Celtic music, pop songs, world music, punk, folk and even hip-hop songs are some of what she has written. Now at age 34, Christina is ready to fully immerse herself in music, because it’s truly one of the most important aspects of her life. Fundamentally, she believes that music has the power to help heal the world. Christina loves teaching and music so much, she is incredibly excited to meet and inspire budding musicians.