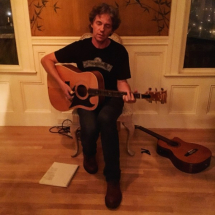 Chris Brokaw is a professional musician and music teacher based in Seattle. Originally from New York and Boston, he has released over two dozen solo records of vocal and instrumental music, as well as with the bands Come, Codeine, The Lemonheads, The New Year and many more. He has worked as an accompanist to Thurston Moore, Evan Dando, Jennifer O'Connor, Christina Rosenvinge, Steve Wynn, Rhys Chatham,and Johnny Depp amongst others; has scored five feature length films; composed for dance companies in Boston and Ireland; and performed throughout the US, Europe, UK, Canada, Russia, Asia, Australia, New Zealand and Africa, from New York's Lincoln Center to Mali's Festival In The Desert. His music has appeared on ESPN and on the tv shows "Friday Night Lights" and "Eastbound And Down".

Chris has taught acoustic and electric guitar for twenty years, concentrating on flat picking, finger picking and slide guitar, in the rock, folk, blues, punk and country idioms. He enjoys helping students learn to play their favorite musics, and crafts his teaching to each student's specific needs. He welcomes students of all ages, levels and orientation, and approaches teaching with patience, enthusiasm and encouragement.