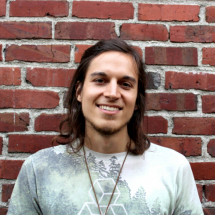 Education: I have taken lessons in multiple instruments from multiple teachers as well as collegiate intermediate level guitar theory.

Chad has been a student of music since he can remember. The first instrument he played was a drum set which launched him into a world of creation that never stopped. Taking lessons and starting groups with friends, he began to learn that songwriting was one of his greatest passions in life, and he would dedicate his life to this art. Picking up a guitar shortly after, and studying through lessons allowed him to combine the worlds of rhythm and melody to start creating songs. Having played in bands since the age of 16, he eventually became interested in studio production and began to make recordings of songs written by himself and friends. Today, he and his partner write and perform music together under the name FeverTribe. Teaching lessons is an exciting part of the musical process. From years of personal experience, Chad is confident that he can make the learning process a fun and smooth progression towards proficient musicianship, no matter the age or experience level of the student.

I have taken lessons in multiple instruments from multiple teachers as well as collegiate intermediate level guitar theory.