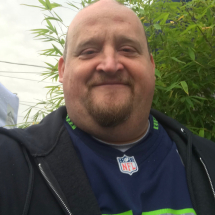 Playing music by yourself or with others is the greatest way to communicate feelings and ideas. Chad truly believes this and takes great joy from practicing his craft, performing on stage, and teaching other people how to play music. Chad has always been active teaching friends and family how to play the drums throughout the years.

Chad’s musical journey started playing trumpet in grade school band. When he was in Junior High, he began to play the tuba and began sitting with the rest of the rhythm section like the drummers and bass guitar player, which is what first led Chad to his love of Drums.

Chad has played drums in original bands and has played numerous performances throughout his career. Chad recorded an album with an original band and played live shows with them at Studio Seven, The Ballard Firehouse, and Seattle Hempfest.

After that project ended, Chad began playing djembe and other percussion for a Seattle blues band, The Mojo Kings. Chad eventually took over on the drum kit and played hundreds of shows with this group, mostly in the North Seattle area. While playing for The Mojo Kings, Chad formed another band that focused on Classic Rock and Metal called The Garage Band. This band has also played numerous shows around the Seattle area. Playing music for the last twenty years has been a major part of Chad’s life. He has even gotten to jam with famous local and nationally touring acts as well as his fellow band mates.

Chad is looking forward to sharing his experience performing and playing music with all students!