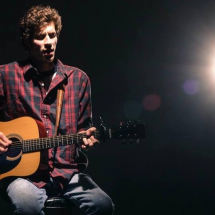 Carson Talerico was born and raised in Cle Elum, WA where he developed a lifetime passion for music. He began guitar lessons in third grade and picked up the drums a couple years later and those instruments have followed him here to Bellevue where he currently resides. Carson also over the years began to revel in songwriting, producing and recording music. After receiving an Associates Degree in Arts and Science from Bellevue College he excelled in the Seattle Pacific University's music program, ultimately earning a Bachelor's degree in Music with an Emphasis in Technology, graduating with Magna Cum Laude honors.

Currently Carson plays in local bands and writes music and performs as a singer/songwriter with his acoustic guitar with some producing and sound engineering as well.

Throughout his schooling and years as a musician Carson has gained experience in many different areas and genres of music. Whether it be playing drums in rock bands or playing Djembe in the Ethnic Percussion Ensemble as SPU. His knowledge extends to guitar in a multitude of genres such as Blues, Jazz, Pop, Rock, and Folk on both electric and acoustic.

Carson's goal while giving lessons is to develop students' music skills with individualized plans while strengthening an appreciation and respect for music. He encourages and implements the use of resourceful technology during lessons, for example, a recorded video for study material. In addition Carson makes sure music theory remains the foundation of each lesson. Most importantly, Carson remains extremely optimistic and positive through the learning process creating a fun but productive learning environment.