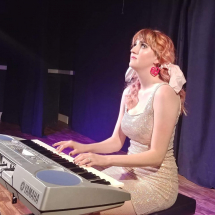 Carly Martin wants to make you laugh. She wants to help you learn music, too, but if you're not having fun while doing that, then what is the point?

Carly holds a B.S. in Songwriting with a minor in Sociology from the University of Colorado. She's a Seattle-based music teacher, musical comedian, and producer. Her improvisational musical comedy show, "Hot Girl Sings", has a residency at The Pocket Theater in Greenwood, and she recently completed the show's tenth run! The show was recommended by Seattle's The Stranger, with Carly's music being described as "heartbreaking ditties".

In addition to her full-length show at The Pocket, Carly's performed at The Skylark, Cafe Zippy, and Hard Rock Cafe, among other intimate venues around Seattle. She also has been a featured performer in Intersections Festival each year since its conception in 2018.

Carly has taught piano for 11 years, directed children's choirs for 6 years, and taught voice for the last year and a half. She adores the joy that comes from helping students with new skills and ideas to expand their musical range. Carly's teaching style is tailored to each individual student-- so get ready to discuss your musical goals and dreams! Whether you've never looked at sheet music in your life or are simply looking for some light guidance on your self-directed musical journey, Carly's ultimate wish is to support you (and probably make you smile in the process). She is very much looking forward to meeting you!