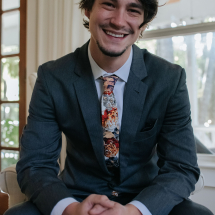 Caleb Hicks is an accomplished musician, songwriter, producer, engineer, and multi-instrumentalist. He’s been teaching music since 2012. He learned how to play guitar when he was 12 and began recording his own music at 15. He’s been playing and performing professionally ever since.

In addition to guitar Caleb plays piano, bass, and drums. He has experience writing music in several different genres and loves to help other artists and musicians turn their ideas into tangible songs. In late 2018 he successfully completed the Joel A. Katz Music & Entertainment Business Program and was subsequently hired on as assistant to the the co-director. During that time he learned a lot about teaching music production and songwriting while further honing his skills as a musician. He holds a bachelor’s degree in Business Management as a graduate of Kennesaw State University.